The population of Poland before the outbreak of World War II was 35,100,000 (including 3,460,000 Jews). Under Polish law the Jews were organized in religious communities, which made up the Religious Union of the Mosais Faith. The Jews who lived in Poland had their own political parties (including parliamentary representation), schools, theaters, periodicals (over 300 titles in Hebrew, Yiddish, and Polish), scientific institutes, and publishing houses. Most Jews worked in trade and the crafts. Some owned factories which employed Jewish workers.

The coexistence of Poles and Jews in the Poland reborn in late 1918 was not free of tensions, and they intensified primarily on economic grounds in the 1930s.

After Hitler’s rise to power in 1933 in Germany, the Nazi-governed state gradually introduced repressive laws toward the Jews. Thereafter, and still before the outbreak of World War II, came

The victims were marched to the gas chamber straight from the unloading platform.

numerous crimes (especially during the “Night of Broken Glass”) which were to “cleanse” the country of “Jewry.” The Germans made elimination of the Jews one of their war aims, but the “final solution to the Jewish question” matured gradually. The Germans conducted the first massacres of Polish Jews during the 1939 September Campaign, murdering 7,000 Jewish civilians. Introduction of draconian and racist laws was another anti-Jewish measure. Jews and Poles of Jewish origin were ordered to wear armbands with the Star of David. They had to perform compulsory labor (for men between 14–60 years of age). Forced labor camps were set up for them and then they were forced in large numbers into ghettos, which they were prohibited to leave. By mid-1941 there were about 400 ghettos inThe General Government alone, with the biggest one in Warsaw, which contained at least 400,000 people. The Jewish population’s ghettoization was accompanied by expropriation: both personal effects (e.g., jewelry) and Jewish apartments and companies were subject to requisition by the Germans. The Germans governed the ghettos through Jewish councils (Judenrat) and the Jewish police. Hunger, lack of space, and diseases plagued the ghettos — their streets were strewn with corpses and people dying of hunger and exhaustion. Enormous social inequality in the ghettos ensued. An elite of sorts included the more wealthy Jews who sold off their pre-war effects and real estate, along with Judenrat employees and Jewish police functionaries, collaborators, and finally smugglers and owners of upscale restaurants. Aside from the overt life, in almost all ghettos there was also the underground life, both economic and political (political parties, from the socialist Bund to the Zionists, continued their activity). An illegal press operated (as many as 50 titles in the Warsaw ghetto) and contact with the “Aryan” side was maintained, including contacts with representatives of the Polish Underground State. Emanuel Ringelblum undertook an unusual mission: in his Chronicle of the Warsaw Ghetto he documented everyday life, including the regulations and actions of the German occupier. His work illustrated the genocidal policy of the Third Reich toward the Jews detained in the ghettos.

The planned extermination of the Jewish population began in June 1941 when the Germans invaded the Soviet Union.

The planned extermination of the Jewish population began in June 1941 when the Germans invaded the Soviet Union. The German detachments, as well as Ukrainian and Lithuanian collaborative auxiliary detachments, carried out mass executions of various categories of people, mostly Jews, while moving into Poland’s eastern territory, which had been occupied by the USSR , and then into Soviet Russia). 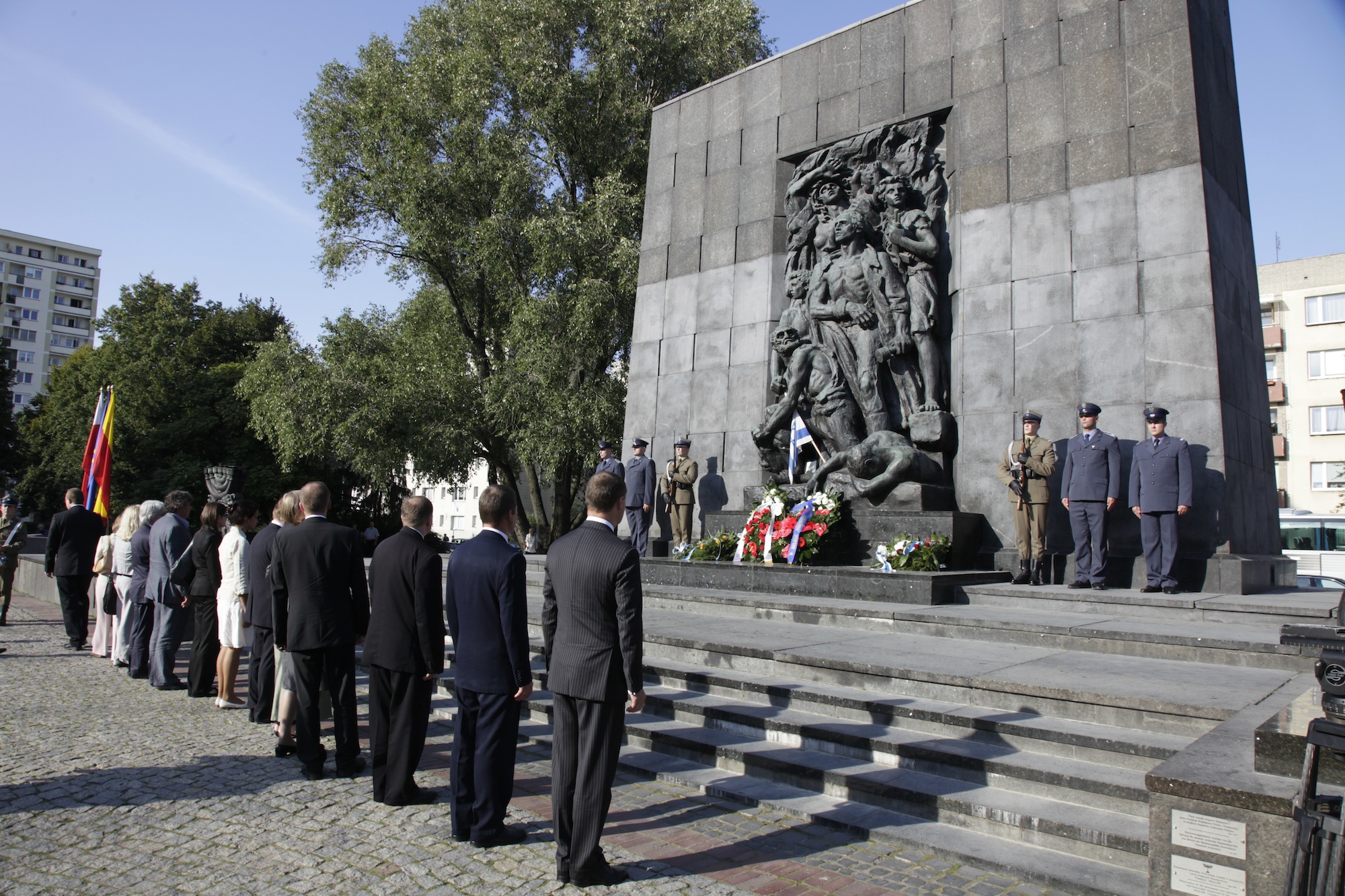 Thus, from July 1941 to 1944 over 70,000 Jews were executed in Ponary near Vilnus. In the summer of 1941 the Jewish population also fell victim to German-organized pogroms. Their participants were mostly Ukrainians (e.g., from Lvov, Złoczów) and Poles who were inspired or forced by the Germans (e.g., in Jedwabne). Along the Polish Eastern Frontier the Germans used in their propaganda the anti-Jewish sentiment occasioned by the fact that some members of the Jewish community had collaborated with the Soviets during 1939−1941.

They used trucks so constructed that the fumes were emitted inside the van killing the Jews locked inside.

In December 1941 the Germans set up their firstdeath camp in Chełmno (Kulmhof) on the Ner River (in the territory incorporated into the Third Reich). They used trucks so constructed that the fumes were emitted inside the van killing the Jews locked inside. The second phase of the Germans’ extermination campaign started at the beginning of the following year. In January 1942 the decision regarding the “final solution to the Jewish question”, that is the physical extermination of the European Jews, was secretly taken at Wannsee near Berlin. The first to be killed were the Jews living in The General Government (Aktion Reinhardt). During the next months of Aktion Reinhardt 1.5 million Jews were gassed in Bełżec (from 1942), Sobibór (also from 1942) and Treblinka (from July 1942). At least 250,000 Jews from the Warsaw ghetto were killed in Treblinka during 46 deportation days. Warsaw pedagogue Janusz Korczak became a symbol of heroism in that tragic period. Even though he could have crossed to the “Aryan” side he decided to share the fate of his wards from the Jewish orphanage and die with them in Treblinka. Reluctant to follow the German orders connected with deportation to the death camps, Warsaw Judenrat chairman Adam Czerniaków committed suicide. This is what he wrote right before his death. “They are demanding that I kill the children of my people with my own hands. There is nothing for me to do but to die.” Most deportations from the ghettos to the death camps proceeded similarly. Andrzej Żbikowski wrote: “Having received a relevant order, the [German] police surrounded the local ghetto and brutally drove out the Jews who were to be killed to the nearest railway station. From there they went to the gas chambers in sealed freight cars. There, after a short selection — the strongest ones were spared to perform auxiliary duties — the Jews were driven naked (women had their heads shaved) to the chambers. Then a special Kommando buried or burnt the bodies”. In total, the staff of Aktion Reinhardt and the three death camps employed 92 Germans and 300−350 guards, mostly of Ukrainian origin who had trained in the Trawniki camp near Lublin.

They used trucks so constructed that the fumes were emitted inside the van killing the Jews locked inside. The second phase of the Germans’ extermination campaign started at the beginning of the following year.

The Jews resisted the deportations to the death campsin various forms. They usually chose to illegally cross to the “Aryan” side. Physically fit, young Jews tried to escape from the transports, but unfortunately those efforts were often futile. Others escaped from the labor camps. Some joined forest partisan detachments looking for rescue, food, and shelter with a weapon in their hand. In the Warsaw ghetto, where there were about 50,000 Jews left after the 1942 deportation. There were also two underground combat structures: the Jewish Combat Organization (Żydowska Organizacja Bojowa, ŻOB) and the Jewish Military Union (Żydowski Związek Wojskowy, ZWZ). The fighters carried out sentences on Jewish collaborators, gathered weapons, and prepared themselves to fight the Germans. The uprising broke out on April 19, 1943 as the Germans planned a final liquidation of the ghetto. It lasted over three weeks. The Jews fought ferociously under the command of Mordechai Anielewicz. The German detachments marched into the ghetto and gradually destroyed the resistance pockets, setting house after house on fire and gradually seizing streets, tenements, and bunkers. Only a few dozen fighters crossed to the “Aryan” side and survived the uprising. It is estimated that over 80 German soldiers died. On May 16, 1943 the Germans blew up the Great Synagogue, while Jürgen Stroop, who commanded the liquidation, triumphantly reported to Berlin that “The Jewish Quarter of Warsaw is no more”.

The first to be killed were the Jews living in (Generalgouvernement, GG) – The General Government (Aktion Reinhardt). During the next months of Aktion Reinhardt 1.5 million Jews were gassed in Bełżec (from 1942), Sobibór (also from 1942) and Treblinka (from July 1942). At least 250,000 Jews from the Warsaw ghetto were killed in Treblinka during 46 deportation days

Apart from the extermination of millions of Jews in thedeath camps, during 1942−1944 the Germans executed several hundred thousand Jews in Forced labor campslocated e.g., in Płaszów, at Majdanek, in Oświęcim and Stutthof. At the same time, transports of European Jews from the Protectorate of Bohemia and Moravia, from Slovakia and Hungary, as well as from France, Belgium and the Netherlandswere  sent to the death camps.Most transports were sent to the Auschwitz-Birkenaudeath camps. The victims were marched to the gas chamber straight from the unloading platform. According to the latest estimates over 1 million Jews were killed in the camp. Polish victims (the second largest group) numbered 75,000; Gypsies — 21,000 victims; Soviet POWs — 15,000. Altogether, the Germans murdered at least 5,500,000 European Jews, including 2.7−2.9 million Polish Jews. Many Jewish victims have remained anonymous due to the mass scale extermination method adopted by the German executioners. Indeed, making a detailed list of the names of Jewish victims seems impossible. Nonetheless, the genocidal operation against the Jews was characterized by German meticulousness. The chief coordinator of the mass annihilation of the Jewish people was Adolf Eichmann.